Hamsters usually make a variety of noises to communicate with their human owners. While Hamsters don’t cry like human babies, they scream, squeal or squeak.

It can be a disturbance for some people as well. But why do Hamsters squeak? Are they happy gentle squeaks or distressed squeaks? Is she showing any other symptoms? Could she be pregnant and does she have any underlying illnesses? Is it an emergency?

In general, Hamsters squeak when they are happy or excited. You may see them squeak when you first get them home. They may also squeak when you hand them their favorite treat. Some hamsters are more vocal than others.
A few other reasons for squeaks include pain, irritation, annoyance, or stress.

Pay attention to your Hamster if you hear a squeal. Look out for pain, injury, or any other discomfort they may be experiencing.

If you are concerned, you could talk to a vet or your local pet shop

What does it mean if your Hamster squeaks?

Hamsters don’t make loud-mouthed noises like other mainstream pets do. However, a sudden piercing noise can surely alarm any hamster owner.

Contentment, threat display, or from physical discomfort whether it is hurt, sick, hungry,or thirsty.

Most commonly when they are in pain or experiencing fear. Hence, it’s important to pay attention as it can indicate sickness or injury.

Dwarf Hamsters(convivial amongst all) will also squeak when they are frolicking with each other.

Female Hamsters come into heat every 4-5 days. Heat is one of the primary reasons behind a hamsters squeak. Especially virgins, they frequently cry until they are used to their hormonal cycle.

Check your Hamster’s cage for sanitation and be sure it has plenty of fresh food and water. Hamsters usually defile their food so even if it seems like it is fresh, it may not be.

If you believe your Hamster is sick, take it to a vet.

This is the best book I ever came across. It helped me a lot to understand my Hamster better. 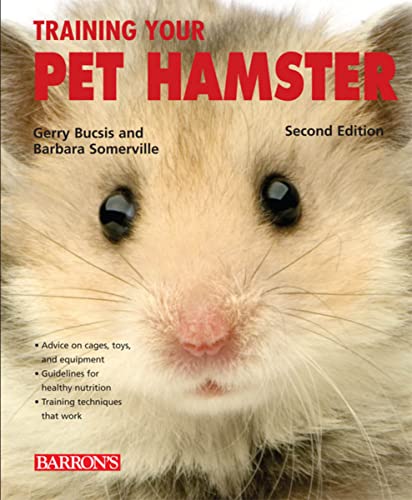 Have you ever admired what your Hamster might be thinking or that if they ever want to tell something to you?

Hamsters aren’t the noisiest creatures, but they do vocalize fairly frequently.

It is also proved scientifically that the noise made by some Hamsters even helps them to navigate.

Compact, infrequent squeaks mean that your Hamster is happy.

If you find your little one squeaking continuously, it may be a signal that he demands attention, or that he is frightened and threatened by something. Depending on the situation they can either be squeaking in pain or distress or in delight and excitement.

Do Hamsters squeak when in pain?

Hamsters who are wounded or are otherwise in pain may scream, especially if something aggravates the pain.

Like any other living being, a harsh cry is the natural response of the body, and the same is true with our hamsters as well.

Some physical signs of illness or death in a Hamster are:

Keep an eye out for these distinguished signs that something might be wrong. If your Hamster exhibits any of these traits or you believe your hamster is sick, call a veterinarian as soon as possible.

Do Hamsters squeak when scared?

The most common scream that comes from Hamsters is fear and anger.

A Hamster that is scared feels threatened or is experiencing pain may squeal or even scream as a result.

A Hamster may scream loudly if they are inappropriately handled. Never let a child (under 15 years) handle your Hamster. Hamsters are very conscious of who is handling them and will often yell if they are passed to a new person. You should never make the mistake of introducing your little one to strangers until you are certain they are already comfortable with you.

A fight between your Hamsters is yet another reason that can make them squeak out loud.

Your Hamster may squeal when he is taken by surprise: being awakened from a sound sleep by an unexpected touch or movement of the cage.

Teeth chattering is typically a sign of fear or hostility among male Hamsters. However, female and intersexual encounters can also lead to teeth chattering and displays of aggressive behavior.

Syrian Hamsters( the biggest among Hamsters) vocalize when dared by other Hamsters as a warning or a sign of aggression. They are lonely animals, unlike the Dwarf Hamsters.

If your instinct tells you that your Hamster is not at all happy, I would suggest you make an appointment with your vet.

Do Hamsters squeak when fighting?

It can be stressful for any Hamster owner to see his little ones fighting. You need to look out for their behavior to understand the cause.

Hamsters show dominance in front of each other.

Hamsters frequently squeak in front of their cage mates to prove themselves to be dominant. They also show the sign of dominance by jumping on top of each other, threatening each other, not letting their inmates eat, injuring each other. Tussles or sniffs are also pure signs of showing dominance.

Strifes can be boisterous and intense, but if you’re convinced they aren’t harming each other, let them work things out among themselves. Your interference can actually worsen things up and can escalate things to real fighting.

The goal is to do whatever gives your Hamsters the highest quality of life.

How to stop my Hamsters from fighting?

Provide your Hamsters just treatment and attention, this will solve the problem in most situations. This can be done by feeding, playing, and brushing them up at the same time every day.

Avoid interfering with your Hamsters when they are squabbling(a settling of dominance issue) among themselves. As long as the Hamsters are battling, you should let them counter each other on their own.

Drawing one of them out of the enclosure can be stressful for your Hamsters. With the passage of time, you will notice a change in their behavior and that now they are less aggressive towards each other.

However, If a hamster causes injury or interferes consistently with his cagemate’s water, food, rest or exercise, the pairing is over.

You should also remember that once you have separated Hamsters they should never be allowed to socialize with each other again.

In conclusion, it’s really all about being mindful and following good Hamster care. If you ensure that your hamsters are pleased and living in an arena that’s big enough for pairs, you could see a flourishing cohabitating situation.

However, some Hamsters just will not get along. You can’t force it and you shouldn’t feel bad if you have to keep them separate for their own safety.

Do Hamsters squeak before they die?

Though Hamsters generally show all their emotions through their squeal, squeaks, and screams but it is totally the other way round when death approaches them.

A dying Hamster generally becomes tranquil in its day-to-day activities, it hardly plays anymore and it will sleep a lot often finding unique accommodations in the enclosure to try to protect itself.

It may just also surprise you and all of a sudden it has slept into its forever sleep when you were not expecting it to.

Few must note signs are listed below:

Also, Dwarf Hamsters also tend to curl themselves up’ but this isn’t useful as many also do this while sleeping.

Now, if there’s any possibility that they are just very cold and in a shock-like state called TORPOR(frequently called hibernation). Pick them up lightly. You must immediately warm them up. ou can do this by placing them on a warm water bottle(don’t use boiling water) and wrap it in a towel to prevent excessive heating.

Don’t leave the Hamster in hibernation as this can lead to his death!

After the Hamster wakes up in a cage with fresh bedding, check the room temperature, and do all you can to make your little one comfortable.

How do I get my Hamster to stop squeaking?

Your Hamsters can be quite vocal especially when you approach them in a wrong way by which they may feel threatened. Remember not to approach them from above with your hand let them know you are there first by letting them sniff you and then try to pick them up.

The best way to handle Hamsters is gradually and carefully to assure that they don’t become terrified of you.

Remember that food and water are vital to Hamsters, in part because they are so small. Seek the vet’s help if your Hamster hasn’t had any food or fluid in 2 or 3 days.

Make sure that your little creature is not being stressed out by anything they can see or hear near their compound. (Like one of your others pets or a loud stereo).

If your Hamster hisses and squeaks constantly, give him something to do in his cage: a wheel for running on may divert him and improve his mood.

Check your Hamster’s cage for cleanliness and be sure it has plenty of fresh food and water. Hamsters will stain their food so even if it looks like it is fresh, it may not be.

If your Hamster doesn’t respond to any of your attempts to make it comfortable and keep it fed and hydrated, take it to your vet. Getting the suitable medication in a timely manner could be key to improving your hamster’s health.

I found these amazing Hamster play toys on Amazon, my Hamster loves it. Check it out! 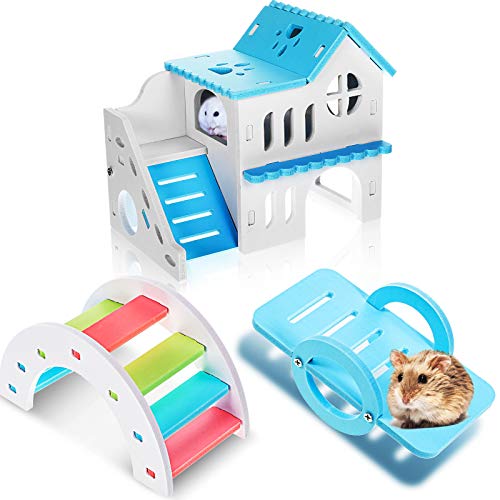 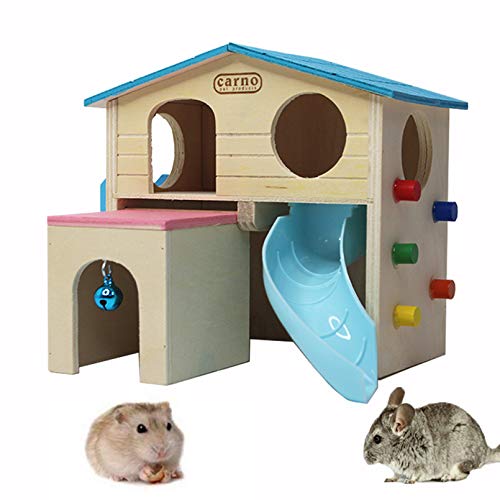 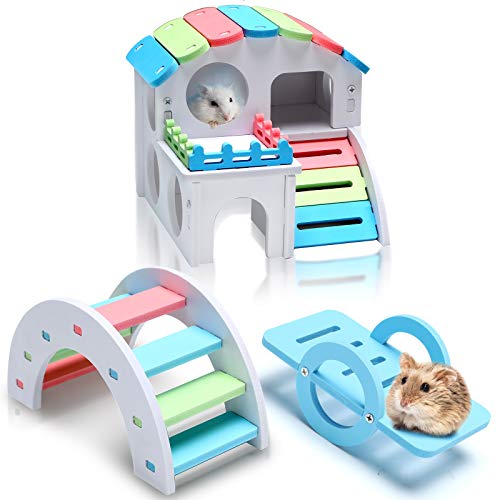 A squeak or squeal could mean a lot of different things in Hamsters. Right from happiness, fear, anxiety, or health issues, all can lead to crying of Hamsters.

Though Hamsters are petite creatures, their squeak may convey a ton. Never ignore your Hamster when you hear them squeak, always have a look if everything is ok.

You must always keep your ear to the ground.

link to 6 Steps To Calm Down A Hedgehog

Hedgehogs are just little animals in a big world. There is a lot to be afraid of for these prey animals. Hedgehogs can be easily spooked by sounds, smells, and fast movements. During these times, you...

Continue Reading
link to Why Is My Hamster Fat All Of A Sudden? (You Must Know)

Every owner wants to give the best care and life to their Hamsters. But sometimes, your Hamster might start eating too much and become overweight. Keeping your Hamster’s weight in a healthy range...